The Anatomy of the Ear

The structures of the ear and what they do

Organs of Hearing and Balance

The organs of hearing are fascinating, when we think about hearing we often focus on the ear. While hearing happens in the ear, understanding happens in the centres of the brain responsible for sound. The ear is just one part of the chain of hearing, if one link in that chain has problems, hearing and understanding is made more difficult. Let's explore the anatomy and physiology of the ear. 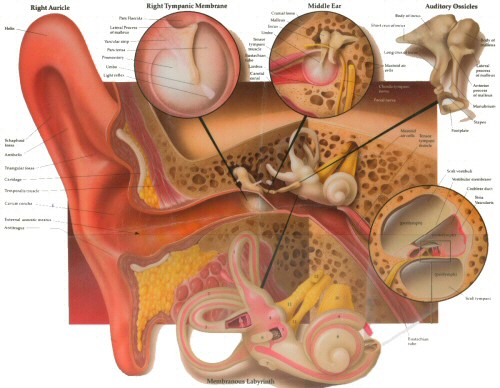 The membranous semicircular canals are similar in shape to the bony canals and each has one swollen end called the ampulla. The utricle is a sac which receives the five openings of the membranous canals. The saccule is a smaller sac and is joined to the cochlear duct by a narrow canal. From both the utricle and the saccule a small duct is given off and these join to form the endolymphatic duct which passes through the vestibule and ends blindly. The blind end is slightly dilated and is called the endolymphatic sac.

The main function of the cochlea is to convert sound waves into nervous impulses. The organ of Corti, on the basilar membrane, is the auditory transducer to convert mechanical to electrical energy. The hair cells and their nerve endings are contained in the organ of Corti. There are one row of inner hair cells and three to five (towards the apex) rows of outer hair cells. Each ear contains about 15,000 hair cells. The arch of the rods of Corti give the organ rigidity.

The organs of the utricle are responsible for the sensation of gravity. The maculae and saccule are made of delicate nerve endings that are connected to a structure made of calcium carbonate. These particles have a greater density relative to the fluid that they are immersed in, causing them to fall because of the action of gravity. As the head moves in relation to gravity the particles exert pressure on the nerve endings. The macula and saccule are roughly at right angles to each other and give slightly different positional information. In this way the utricle of the inner ear is able to provide the brain with information about the position of the head relative to gravity.

Auditory Ossicles: A chain of three small bones connects the tympanic membrane with the inner ear via the oval window. The malleus consists of a handle and a head. The handle is attached to the tympanic membrane is inspected with an auriscope. The head of the malleus is surrounded by air and lies in the upper parts of the middle ear space called the epitympanum or attic.

In the adult the outer ear consists of the external pinna or auricle shown below, and the external ear canal which extends about 25 mm inwards. The external ear canal ends at the typanic membrane (eardrum) which is a thin, almost circular. membrane stretched across the depths of the ear canal. The auricle consists of a springy elastic cartilage with a complex shape and an extension about one third of the way down the ear canal. This extension is not a complete tube.

The middle-ear consists of the tympanic cavity which connects not only with the poisterior parts of the nose - the nasopharynx, by way of the eustachian tube, but also with air filled spaces in the mastoid bone behind the ear canal and the middle ear.

As the head rotates movement of endolymph cause the cupulae on both sides of the head to bend in opposite directions. The difference in activity between the paired ampullae results in the sensation of movement.

The boundary between the ear canal and the middle ear is the tympanic membrane. This is also frequently called the eardrum which is a misnomer because a drum consists not only of the membrane but also of the supporting walls and the air inside. Nevertheless, the tympanic membrane is a thin, almost oval, slightly broader above than below, forming an angle of about 55 degrees with the floor of the ear canal.